Nur Al Huda Academy is committed to a work environment in which all individuals are treated with respect and dignity.  Each individual has the right to work in a professional atmosphere that promotes equal employment opportunities and prohibits unlawful discriminatory practices, including harassment.  Therefore, Nur Al Huda expects that all relationships among employee in the school will be business-like and free of bias, prejudice and harassment.

Nur Al Huda has developed this policy to ensure that all its employees work in an environment free from unlawful harassment, discrimination and retaliation. Nur Al Huda will make every reasonable effort to ensure that all employees are familiar with these policies and are aware that any complaint in violation of such policies will be investigated and resolved appropriately.  Any employee who has questions or concerns about these policies should talk with the human resources department.

These policies should not, and may not, be used as a basis for excluding or separating individuals of a particular gender, race, and age, from participating in work-related social activities or discussions. In other words, no one should make the mistake of engaging in discrimination or exclusion to avoid allegations of harassment. The law and the policies of Nur Al Huda prohibit disparate treatment on the basis of sex, age ,or race, with regard to terms, conditions, privileges and perquisites of employment. The prohibitions against harassment, discrimination and retaliation are intended to complement and further those policies, not to form the basis of an exception to them.

Sexual harassment constitutes discrimination and is illegal under federal, state and local laws. For the purposes of this policy, “sexual harassment” is defined, as in the Equal Employment Opportunity Commission Guidelines, as “unwelcome sexual advances, requests for sexual favors and other verbal or physical conduct of a sexual nature when, for example: a) submission to such conduct is made either explicitly or implicitly a term or condition of an individual’s employment, b) submission to or rejection of such conduct by an individual is used as the basis for employment decisions affecting such individual, or c) such conduct has the purpose or effect of unreasonably interfering with an individual’s work performance or creating an intimidating, hostile or offensive working environment.”

Title VII of the Civil Rights Act of 1964 recognizes two types of sexual harassment: a) quid pro quo and b) hostile work environment. Sexual harassment may include a range of subtle and not-so-subtle behaviors and may involve individuals of the same or different gender. Depending on the circumstances, these behaviors may include unwanted sexual advances or requests for sexual favors; sexual jokes and innuendo; verbal abuse of a sexual nature; commentary about an individual’s body, sexual prowess or sexual deficiencies; leering, whistling or touching; insulting or obscene comments or gestures; display in the workplace of sexually suggestive objects or pictures; and other physical, verbal or visual conduct of a sexual nature.

Harassment is also strictly prohibited. Under this policy, harassment is verbal, written or physical conduct that denigrates or shows hostility or aversion toward an individual because of his or her race, color, religion, sex, , national origin, age, disability, marital status, citizenship, genetic information, , or that of his or her relatives, friends or associates, and that: a) has the purpose or effect of creating an intimidating, hostile or offensive work environment, b) has the purpose or effect of unreasonably interfering with an individual’s work performance, or c) otherwise adversely affects an individual’s employment opportunities.

Harassing conduct includes epithets, slurs or negative stereotyping; threatening, intimidating or hostile acts; denigrating jokes; and written or graphic material that denigrates or shows hostility or aversion toward an individual or group that is placed on walls or elsewhere on the employer’s premises or circulated in the workplace, on company time or using company equipment by email, phone (including voice messages), text messages, social networking sites or other means.

These policies apply to all applicants and employees, whether related to conduct engaged in by fellow employees or by someone not directly connected to Nur Al Huda (e.g., an outside vendor, consultant or customer).

Conduct prohibited by these policies is unacceptable in the workplace and in any work-related setting outside the workplace, such as during business trips, business meetings and business-related social events.

Reporting an Incident of Harassment, Discrimination or Retaliation

Nur Al Huda encourages reporting of all perceived incidents of discrimination, harassment or retaliation, regardless of the offender’s identity or position. Individuals who believe that they have been the victim of such conduct should discuss their concerns with their immediate supervisor, human resources or any ombudsman. See the complaint procedure described below.

In addition, Nur Al Huda encourages individuals who believe they are being subjected to such conduct to promptly advise the offender that his or her behavior is unwelcome and to request that it be discontinued. Often this action alone will resolve the problem. Nur Al Huda recognizes, however, that an individual may prefer to pursue the matter through complaint procedures.

Individuals who believe they have been the victims of conduct prohibited by this policy or believe they have witnessed such conduct should discuss their concerns with their immediate supervisor, human resources, or any ombudsman. Nur Al Huda encourages the prompt reporting of complaints or concerns so that rapid and constructive action can be taken before relationships become irreparably strained. Therefore, while no fixed reporting period has been established, early reporting and intervention have proven to be the most effective method of resolving actual or perceived incidents of harassment.  Any reported allegations of harassment, discrimination or retaliation will be investigated promptly. The investigation may include individual interviews with the parties involved and, where necessary, with individuals who may have observed the alleged conduct or may have other relevant knowledge.

Confidentiality will be maintained throughout the investigatory process to the extent consistent with adequate investigation and appropriate corrective action.

Misconduct constituting harassment, discrimination or retaliation will be dealt with appropriately. Responsive action may include, for example, training, referral to counseling or disciplinary action such as a warning, reprimand, withholding of a promotion or pay increase, reassignment, temporary suspension without pay, or termination, as Nur Al Huda believes appropriate under the circumstances.

If a party to a complaint does not agree with its resolution, that party may appeal to Nur Al Huda’s executive director or the chief operating officer. False and malicious complaints of harassment, discrimination or retaliation (as opposed to complaints that, even if erroneous, are made in good faith) may be the subject of appropriate disciplinary action. 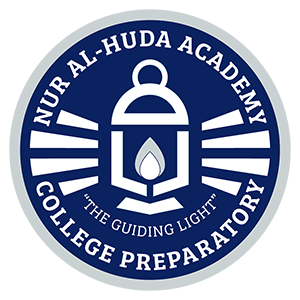 If you would like to receive the latest news on the academy, please provide your email. We promise not to share it with anyone else.